(Happy Birthday, Dad!)
Posted by Shelley at 6:27 AM No comments: Links to this post

Walking Out of Darkness 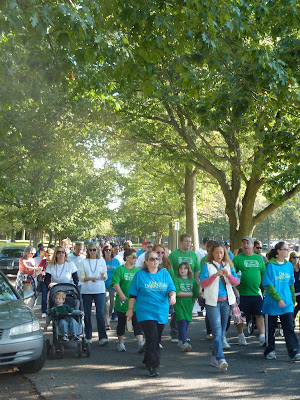 A week ago I participated in an event entitled "Out of the Darkness," which was a fundraising walk for the American Foundation for Suicide Prevention.

I was moved to sign up for the walk by my increasing awareness of the devastating effects of suicide on families and communities. When I confronted the cultural silencing that shapes our attempts to talk about suicide, it reminded me of the journey the gay community has been embarked on, and I felt even more strongly that I should do something.

Still, when I found out about these community walks, I immediately found myself looking for an "out."

As my self-generated excuses fell away, I started to think what I think is a Martin Luther King quote: "Faith is taking the first step even when you don't see the whole staircase."

So I signed up, and asked friends and colleagues to support me. Not having done one of these kinds of fundraising events since the advent of internet-enabled pledges, I set my initial goal at $250. Two hours later, my friends had blown through that. I doubled it. Same result. Finally I set a goal of $1000. To see how things turned out (or even to contribute after the fact, if you are so moved... the page will stay up for a little longer, I think), click here.

As soon as I signed up, I reached out to a former student to ask if she might join me, and was grateful when she immediately agreed. (I didn't want to do this alone.) When we showed up at the New Brunswick park that hosted the walk, we registered and then took off walking almost immediately (she was familiar with the park), not wanting to cool our heels waiting for the official start time.

By the time I took the picture above, we were on our second "loop," while the official march was still on loop one. There were a lot of people. Hundreds and hundreds. I knew that suicide was affecting many hearts, but to see so many survivors and allies all in one place made my heart hurt.

Right up until the day before the walk, I questioned my decision to participate. Every time I received notification that another wonderful friend had contributed in support, I felt buoyed and saddened, all at the same time. A friend said, "Can anyone really do anything to prevent suicide?" And I get it. Because when someone is gone, one common response is for survivors to go over and over the months and days leading up to the death, trying to figure out what, if anything, could have been done. And so many times the answer seems to come back, "Nothing."

But as I learn more from those who have dedicated many hours of toil in this field, I become more hopeful that there ARE things we can do. And of course this work has special resonance for me as a lesbian. Because in the US, at least, study after study has shown that the LGBT population is at even higher risk of suicide. And yet, as the AFSP states, "Despite four decades of research pointing to elevated rates of suicide attempts among LGBT people, national suicide prevention initiatives, including the 2001 National Strategy for Suicide Prevention, have given scant attention to suicide risk in sexual minority persons."

So it's personal for me, in multiple ways, and it has been for some time. What's changed is that I'm now claiming my concern in a vocal way, and actively seeking out ways to become better informed. And as soon as I got home from the walk last week, the last vestiges of doubt melted away. For me, it was definitely the right choice. Suicide is now the second leading cause of death among US college students, another reason that this issue is "close to home" for me. Veterans and members of the military are also at increased risk. I hope you will join me in becoming more knowledgeable about this national epidemic and tragedy. (AFSP's website is a good place to start.) One critical component of prevention may be a matter of a caring person with the right knowledge being available in the right place at the right time... the more of us there are, the better our chances of keeping our friends and loved ones alive. 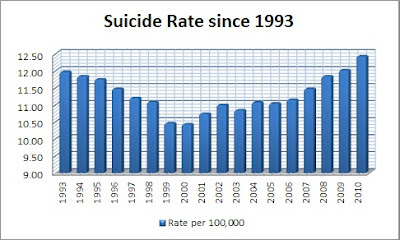 (Thanks for reading this,
and thank you again
to all the wonderful friends and colleagues
who supported me in my walk.)

Posted by Shelley at 1:39 PM 4 comments: Links to this post