There were no bonnets in sight in our Quakerly celebration of Easter. (Although, if you're looking for that kind of vibe, we can recommend friend Melissa Harris-Perry's lovely going-to-church hat.)
But we did indulge in a dress-up spirit of sorts, as we returned to the Trenton Area Soup Kitchen to transform a dingy side lot into an Easter Wonderland for the 90+ children who squealed their way to finding hundreds of eggs provided and hidden by the children of Princeton Monthly Meeting. 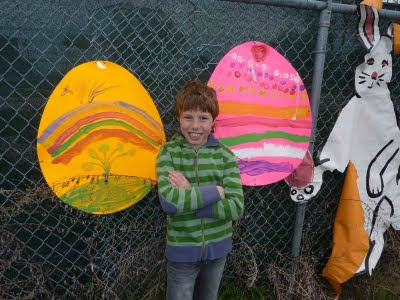 And Mr. D's new bike has a certain fancy flair about it, don't you think? 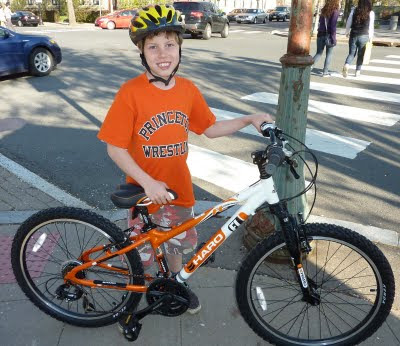 As does Witherspoon Street, with its o'erhanging blossoms... 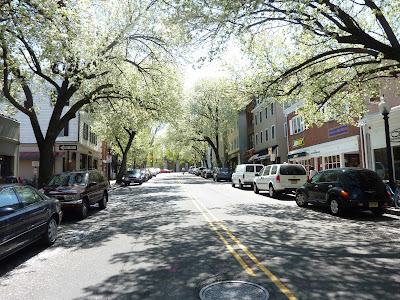 Tomorrow morning we'll start the day
with an "egg war" (good thing Nana's not here,
or none of the rest of us would stand a chance),
so feast your eyes... this is your last chance
to see all twelve of these beauties intact: 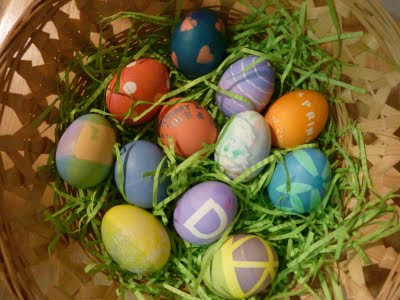 Happy Easter!
(A warm thank you to Sassafras Mama
for an outstanding Easter supper;
she & her boy certainly make for good company,
and she provides a dependably scrumptious meal as well!)
Posted by Shelley at 9:47 PM 2 comments: Links to this post

We have made celebrating the anniversary of Tama's successful adoption of Mr. D a family tradition, and this year (#10! how is that possible?), we started off by sharing songs with a celebratory theme. Here are Tama & Mr. D listening to Kool & the Gang rock Celebration: 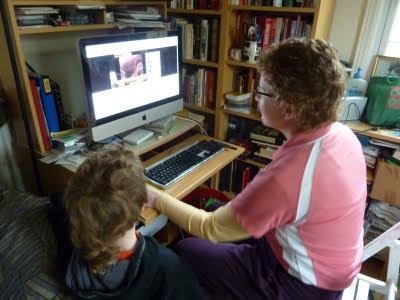 (Mr. D noticed that some people had clicked "thumbs down"
in the comments on this video,
and asked, "Who the heck doesn't like this song?!"
He's turning out nicely, we think.) 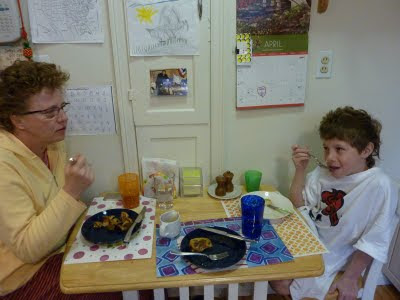 Actually, the first thing we did was treat ourselves
to a fancy breakfast of raisin challah French Toast. 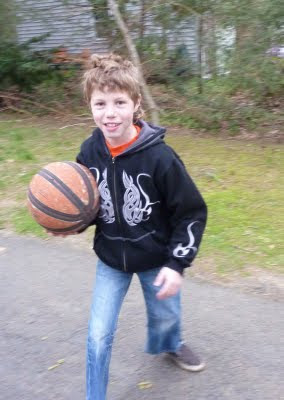 Then the sound of a basketball being dribbled
in our neighbor's driveway called Mr. D's name,
so off he went... 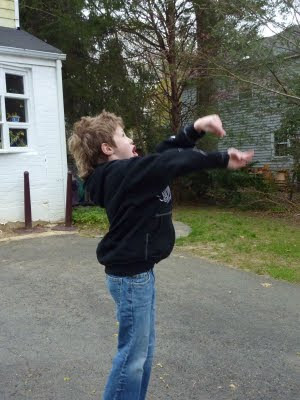 Later, we went on a family bike ride to
our favorite bike store,
where Jay was able to show us a picture
of Mr. D's soon-to-be-delivered new bike! 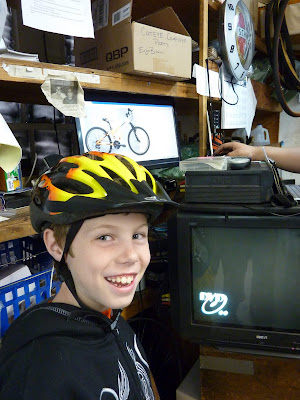 The weather was not cooperating,
so we rode back home
and played several rounds of
Mille Bourne ("nice guy version").
(This version encourages players
to help each other out when they encounter
trouble on the road, and since the original version
is considerably more cutthroat,
"nice guy version" games tend to take a while.
No worries; we had all the time in the world. 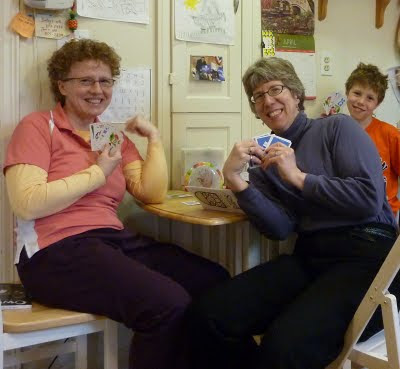 Then, just as happened last year,
we found ourselves in the market for some 3-D movie action. 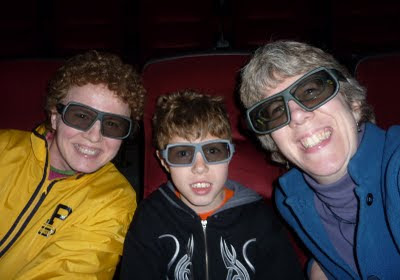 We give Born To Be Wild six thumbs up!

And we remain grateful for each other's
love in our lives... not just on Forever Family Day,
but every day.

(John Keene, who's tweeting for the Poetry Foundation blog this month, tossed out a challenge last night for folks to write a particular kind of poem, so here's my attempt. Can you tell I'd just been to a blues concert?)

Always
before, she had
come to my
defense,
even if we’d been
fighting.

Guess I
hadn’t realized how
Iong it had been since I felt
just-
kissed.

Last
minute
now, we
opened ourselves,
praying for the

quiet moments that might
restore our
sense of
trust,
uncover our shared
vulnerability.

What did I
expect? My grandmother sighing:
“Why are we given
zis life, but to work?”

(I want to be writing more,
and am grateful for the endless
blank page that is the internet.)
Posted by Shelley at 9:18 AM 2 comments: Links to this post