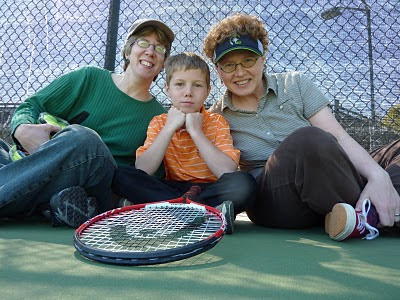 Today was our 9th Forever Family Day, April 19th being the day back in 2002 on which the legal powers-that-be officially recognized our "forever" status as a family. Thanks to Mr. D, our tradition for this most special of holidays is to spend it together, just the three of us. We don't usually have any particular plans; we just go where the day takes us. Tennis courts, for example. 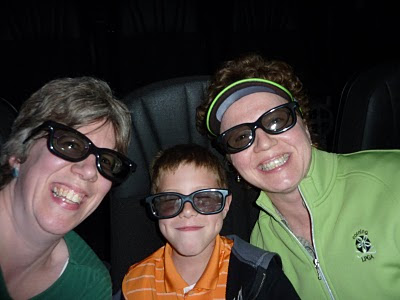 And then perhaps to the latest 3-D movie.
(We give How To Train Your Dragon three thumbs up, BTW.) 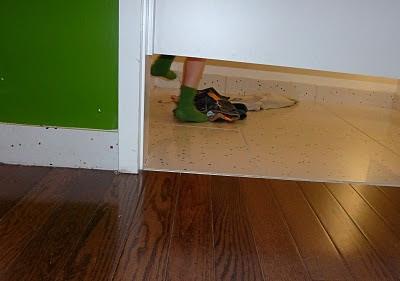 Mr. D found some jeans (on sale!) that he took a fancy to.
So of course we brought them home. And then... 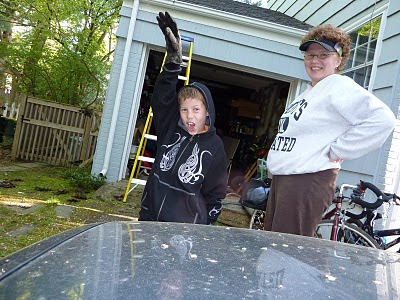 ...bet you didn't know gutter-cleaning
could be celebratory! 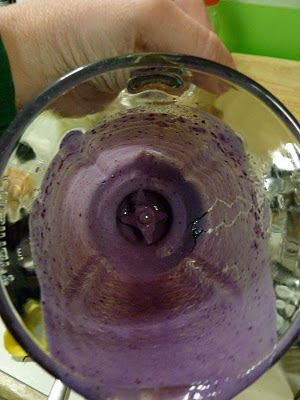 We finished the day with a yummy homemade
berry-cherry-banana-pineapple-tofu smoothie... 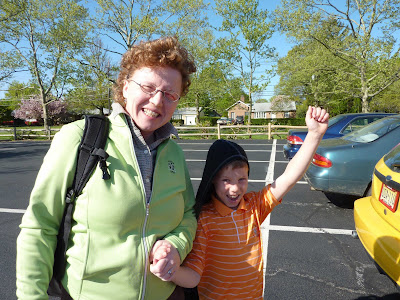 ... which we think may in some way
offset the fact that we started the day
with breakfast at Dunkin' Donuts! 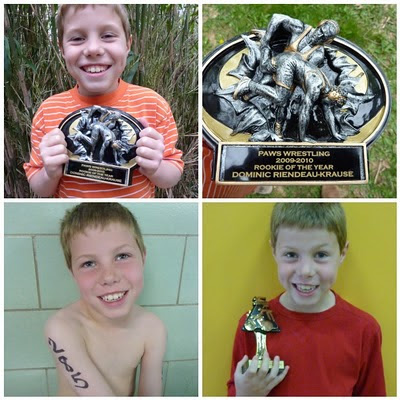 Mr. D missed the PAWS wrestling banquet (too late on a school night, we thought), but was told by several friends afterwards that he'd been named, "Rookie of the Year." Even after the third person told us we weren't quite sure whether we should believe it or not. Nothing quite prepared us for the splendid trophy that was waiting for him at the Recreation Center this past week. With not even a week in which to recover, we were thrust headlong into the next trophy hunt... the YMCA kids' triathlon, in which, as you can see, Mr. D was given the number 285. He can't wait for one of his classmates to ask him about the permanent marker evidence of his exploits, and, for the second year in a row, he came in second in his age group.
For me, one of the highlights of the triathlon came when D & I got to cheer on the winner in his category, an incredibly determined little spark plug six year-old named Henry. "He deserved to win," I said admiringly to D. "He really did," he readily agreed. We clapped and clapped.
Posted by Shelley at 10:20 PM No comments: Links to this post

For as long as I can remember, our Quaker Meeting has worked every spring to raise enough money to "adopt" the Trenton Area Soup Kitchen for a day. Members and attenders of the Meeting have also dedicated time and talent to a Good Friday Easter Egg Hunt at the soup kitchen, which I have been aware of but for some reason have never attended. The children of the meeting spend several Sundays making decorations and tucking candy into the plastic eggs that will be hidden. This year I decided the Mr. D and I would make the additional commitment of helping out at the event itself.

What a great day! 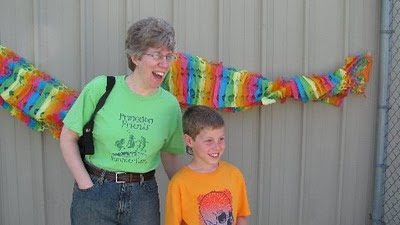 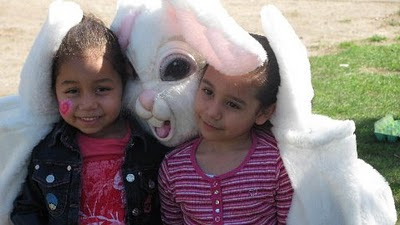 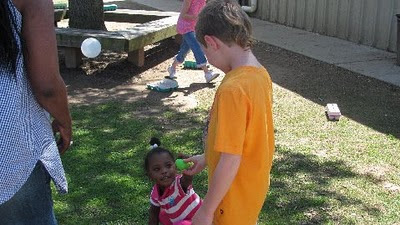 (D was concerned that this tiny egg hunter might need help...) 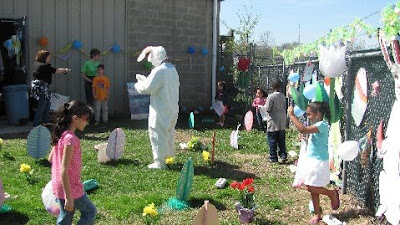 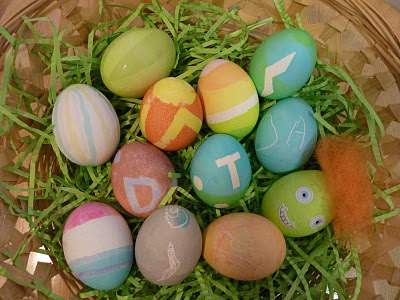 As we colored our own eggs
the next day,
we were still smiling
and trading stories about our time
at the Trenton Area Soup Kitchen.
Hope and new beginnings, indeed.
Posted by Shelley at 6:35 AM No comments: Links to this post

Under the Treaty Elm 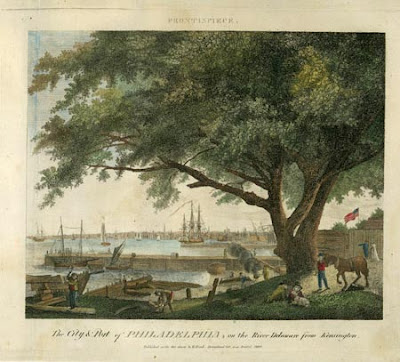 “We meet on the broad pathway
of good faith and good-will;
no advantage shall be taken on either side,
but all shall be openness and love.
We are the same as if one man’s body
was to be divided into two parts;
we are of one flesh and one blood.”

Earlier this year our Yearly Meeting was presented with several gifts at a celebration commemorating the promise of the unbroken Treaty of Friendship made between Pennsylvania Proprietor and Friend William Penn and Lenape Chief Tamanend. The 1682 treaty, believed to have been made under the Great Elm at Shackamaxon along the Delaware River, represents what many people feel is the best of our human spirit. On March 6th, just after Worship in the manner of Friends, our Yearly Meeting and the Lenni Lenape Nation were gifted talking sticks from the PYM Indian Committee, specially minted coins from the Penn Treaty Museum, and offsprings of the Great Elm by Haverford College.

The Great Elm blew down in a fierce storm on March 5, 1810; Haverford College was gifted a scion of the elm and planted it on campus, where it became known as the Penn Treaty elm. This past weekend we looked to celebrate and remember the promise of this unbroken treaty among citizens of the Earth while planting the historical seedling at 4th and Arch Meetinghouse. 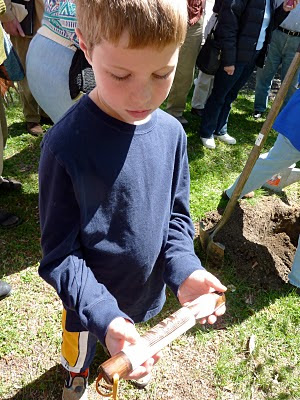 D and the talking stick 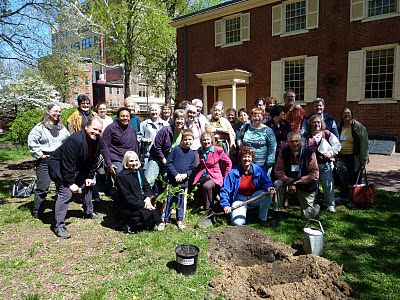 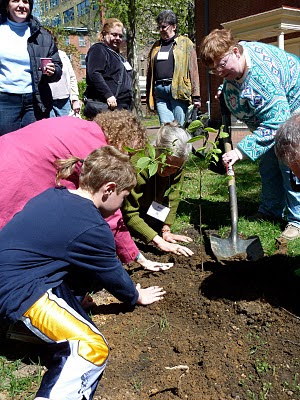 "Tucking in" the tree

It was a wonderful way to honor a historical connection, and also to remind ourselves of the all the work that is still in need of our hands and hearts.
(Maybe my favorite part of this story,
after the fact, is that D,
in telling folks what we did this weekend,
would sometimes begin,
"So, do you know about William Penn?"
Awesome.)
Posted by Shelley at 10:40 PM 1 comment: Links to this post