Forever Family Day 2012, a set on Flickr.
Every year, we celebrate our confirmatory adoption of Mr. D by taking the day off and doing something special, all together. This year's theme, apparently, was animals.


We don't plan this day out ahead of time (other than arranging to take the day off, if April 19th falls on a weekday)... part of the specialness of it is the ease we all feel, knowing that we have an entire day set out before us.


The visit to Bird Paradise was something of a information-gathering mission. Since Mr. D has been a bird lover for as long as any of us can remember, we can imagine that a companion bird might be in his future at some point. Before we hopped a train, we stumbled onto the excellent Amy's Omelette House, which we highly recommend, both for the stunning range of omelette options, and for the just-right level of service friendliness. The River Line train to the Adventure Aquarium in Camden is a treat in and of itself... a smooth and easy ride that takes you almost to the doors of the aquarium, qualifying you for a discount on the price of admission to boot! At the aquarium we oohed and ahhhed our way through a seemingly endless array of marine life... I think the part Mr. D and I both enjoyed the most was petting the stingrays (!).


We are so blessed to have each other, and I hope that we live into that gratitude every day. Still, it's lovely to have this one day where we're paying special attention to that "how did we get so lucky" feeling.

I went to Seattle over a month ago, and have been meaning to post these photos from the non-work portion of that trip ever since.

When I was in junior high, my then new-best-friend Claire said that she'd invite me over to her house on one condition. "Sure thing," I said, "but what's the condition?"

"You may not," she said sternly and without a hint of mercy, "fall in love with my brother."

(Apparently she'd run into this problem multiple times and was getting tired of it.)

So warned, I promised and was permitted access to Claire in her home, where she taught me to play backgammon and how to treat LP's with the care & attention they deserved.

I managed not to fall in love with David. (The lesbian thing probably helped.) But no one had said we couldn't be friends.

So even though we hardly ever talk and see each other even less frequently, David Dana and I have been friends for a very long time, and it was a huge treat to have an opportunity to see him as a part of my travels in the Pacific Northwest earlier this year.
I wish I'd taken a few more photos (only half of David's family is represented in these), but am grateful that David had a hunch that I'd groove on the Seattle Public Library, where these three photos were taken: 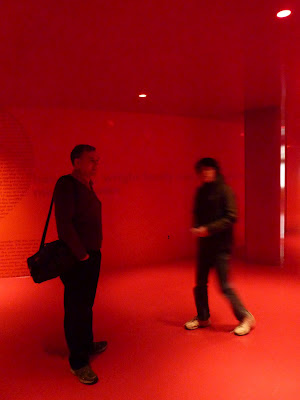 David and his son Drew.
This photo has not been altered.
There really is an entire section of the library that's red.
I enjoyed thinking about how they got THAT
past whatever committee was in charge of wall paint selection. 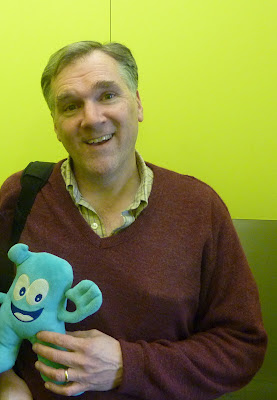 Here's David on the elevator with mascot Haibao.
(Don't ask.) 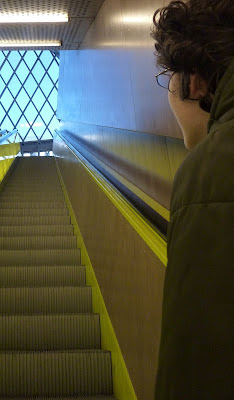 Drew on the library escalator.
(I'm nowhere close to the only tourist
who has oohed and ahhhed her way through
the Seattle Public Library;
for more great shots, see the relevant Flickr pool.)
Posted by Shelley at 4:48 PM No comments: 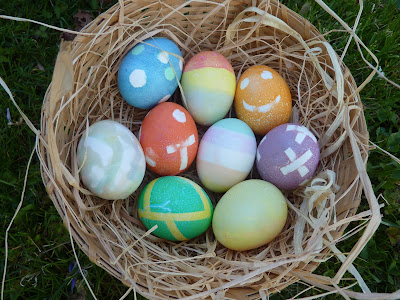 A selection of this year's eggs.
And to answer your question, Nana...
Mr. D absolutely DOMINATED!
Posted by Shelley at 7:11 AM No comments:

Email ThisBlogThis!Share to TwitterShare to FacebookShare to Pinterest
Labels: photo 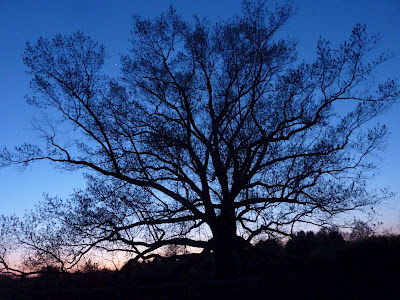 (Here I break the Wordless Wednesday silence
to dedicate this post to Cate Kerr
of Beyond the Fields We Know,
whose luscious images of the natural world
have inspired me for years, now.)
Posted by Shelley at 6:23 AM No comments: