Eight random facts about me (random is harder than it seems like it should be!):

(Thanks to Kelley for the assignment,
and to Getty's Moodstream for some inspiration.
I don't really do the "pass it on" part of memes,
but if you're so moved, consider yourself tagged.)
Posted by Shelley at 11:11 PM 3 comments: Links to this post 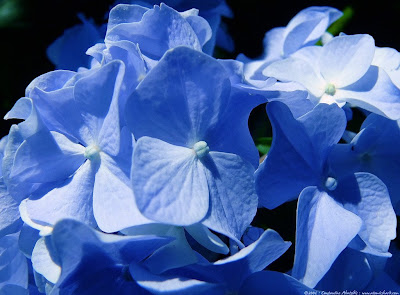 (flickr/ atomicshark)
blue hydrangea —
its specific gravity
pulling me in

I've signed up to lead a few online mini-courses over the summer, and in preparation for that have given myself permission to play around with some technologies that are new to me.

In this case, I combined my noodling with my "to do" list... I've been wanting to do some kind of image-oriented promotion for this amazing Quaker event for at least two years now. Hope folks enjoy it!

(I usually ask friends before I put images
out here on the intertubes,
but haven't gotten to everyone in this show yet...
if you see a picture of yourself and are aghast,
please email me and I'll take care of it.
Oh, and if you're intrigued by VoiceThread,
they're over at voicethread.com, natch.)
Posted by Shelley at 10:42 PM 8 comments: Links to this post

Read about Juneteenth over here. Or here. One of these years, I want to be there when NJ celebrates in style.

May the good news that has taken so long to reach you arrive today.

Tech Tags: juneteenth
Posted by Shelley at 6:45 AM No comments: Links to this post 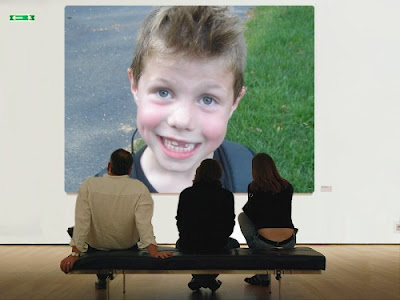 We have watched him every day. But somehow we missed it anyway. How is it possible that our baby boy has only one more day of kindergarten standing between him and the label "first grader"?

(Thanks to the digital geniuses over here
for helping me create that fun image.)
Posted by Shelley at 11:18 PM 5 comments: Links to this post

Earlier this year, a creative soul named Johnny Lee figured out a way to "reverse the charges" on a Wii remote, turning it into a controller for all kinds of environments above and beyond the games for which it was originally intended. Johnny Lee created a video detailing his idea, and now... well, now Andrew can show everyone the artist inside.

(I love this stuff.)
Posted by Shelley at 8:48 PM 3 comments: Links to this post

I have almost 4,000 sites bookmarked via del.icio.us (they're over here, in case you're curious).

Each site is labeled with at least one tag, and this is a visual representation of 80 or so of the most popular tags. Cool, huh? 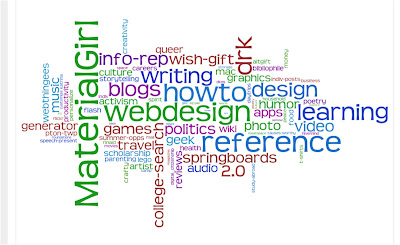 (Click on image to embiggen.)
(Want one? Try heading on over to Wordle.
You don't have to be a del.icio.us user, either...
you can toss any text into the mixer
and then play with the output.
Bad for productivity:
my brownbag lunch today is going to be blah.)
Posted by Shelley at 6:52 AM 2 comments: Links to this post

(A shoutout to my sister
and her fabulous girl children.)
Posted by Shelley at 12:02 PM 5 comments: Links to this post

Go read this great meditation on the anniversary of RFK's death.

Go on.
Posted by Shelley at 11:03 PM No comments: Links to this post 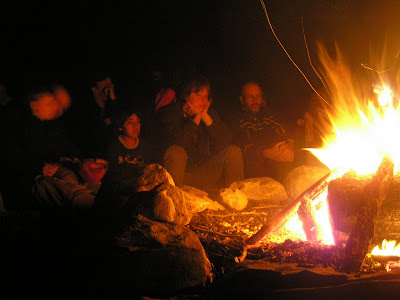 Some of my best nights have been spent at the base of a flame.

Campfires create their own ecosystems, tiny little worlds of being that are particularly well suited to the singing of songs, the telling of stories, and the eating of chocolate smushed between two graham crackers and bonded to a toasted marshmallow.

There's something about sitting right there at the edge of the great unknown, with your infinitesimal spark of light shouting up to a sky full of the echoes of long-ago explosions.

I like the way looking into a fire makes the darkness that much more inky. I love the way black night exposes a sighted person's dependence on light. Nights seem enveloping and without edges, and that endlessness in turn seems to draw me into a more creative place in myself.

"So gimme the light of a campfire, warm and bright, and give me some friends to sing with, I'll be here all night..."

(Thanks to the women of Sunday Scribblings
for their continuing inspiration.) 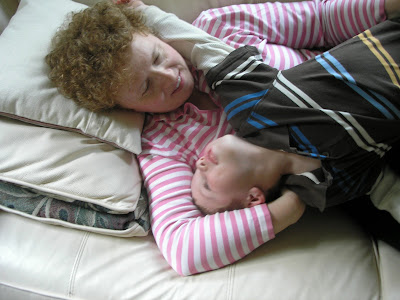 How would you describe your family's culture?

Those are the other two members of my family, Tama and Mr. D, right in the middle of a Ticklefest.

I'm not sure they even knew I was there. I don't know when Ticklefests got started, but they're now a mainstay of our post-dinner, pre-bedtime family time. Right up there with bike rides, wrestling matches, and board games.

We are big-time into fun. We like to make each other laugh. The laundry can wait a bit.

And here's a story that will give you some insight into the role music plays in our family life:

A year into owning an iPod (it was birthday present from those Ticklefesters up there... his idea, her money), I finally got the technology that enables me to play iPod music through the speakers in my car.

The day I got it all working I was juiced up, and after showing Mr. D how it works, exclaimed, "I'm so excited about my new toy!"

Exactly. (If you haven't heard us sing together yet, there's a little audio clip in my full profile.)

So: we like challenges, and asking questions, and science experiments. We like lying on the earth and swimming in the ocean. We prefer our tents to most hotel rooms. We think maps and myths are cool.

Most of our friends live in families that are put together differently from ours. It rarely comes up. But for sure there are now a bunch of kindergartners and parents in this town who "get" two-mom families in an easy, organic way.

Still, we are sometimes frustrated by the larger structures that seek to deny what seems to us a simple and undeniable truth.

We are a family. And we're a part of life.

(Thanks to Mombian for getting the ball rolling;
I'm looking forward to reading about some other families!) 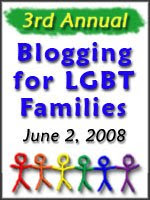 Posted by Shelley at 8:09 PM 2 comments: Links to this post

It was an inauspicious start... 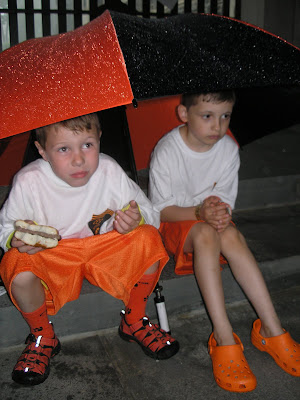 (Mr. D and his friend T
trapped under an umbrella
in an archway during a dramatic downpour.)
But then the sun began to cooperate... 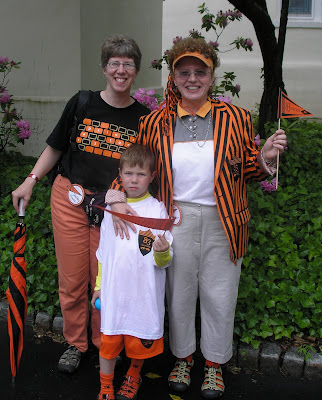 The Princeton Reunion scene is, well, difficult to describe.
The population of the town swells by 30,000 people,
all of whom are wearing orange and black,
and who will defend to the death their right to parade down
the main street of town with their classmates.
Whether or not they liked them back in the day.
Some people plan for this parade for months (years?) in advance: 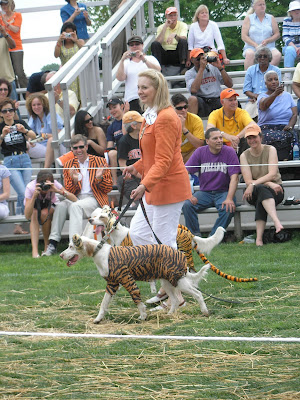 Each class wears their own distinctive jacket.
The class photo shoot made me think that maybe, just maybe...
the author of Where's Waldo was a Princeton graduate? 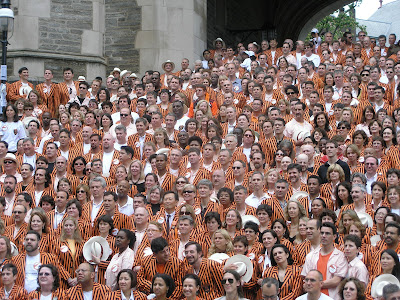 Thank goodness for that one guy in the blue shirt... 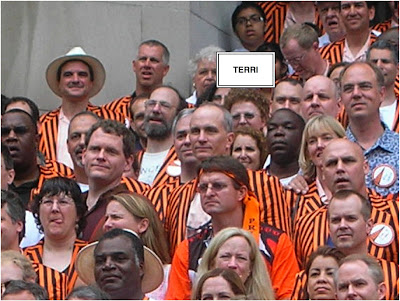 And no matter what you thought of Princeton before,
you're likely to have a more nuanced understanding
once you've really reveled in Reunions. 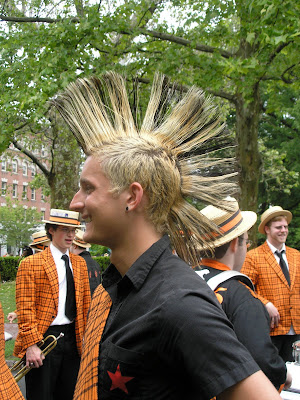 Can't wait for next year!
Posted by Shelley at 11:18 PM No comments: Links to this post