My friend Laura McClanahan is an artist.

I missed her most recent show's opening, but wrote the closing date on my calendar. I would say that fully half of the art shows I've attended in my life I've attended on the final day. It seems that the spectre of of missing the work entirely is what finally propels a show to the top of my to-do list! Last Sunday was that day for Laura's show, and when I plaintively explained my situation to my family, they lovingly jumped in the car and joined me on a road trip to the Hunterdon Art Museum. 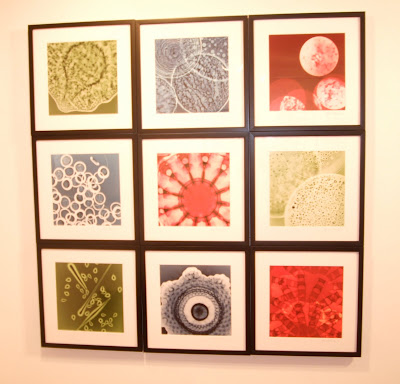 The work was fabulous, as I knew it would be. Laura has been using light as a kind of ally in her most recent pieces, shining or beaming it through objects of her choosing or creation in order to create photograms which capture a kind of alternate universe. These reminiscently cellular images have a taxonomy all their own, at once familiar and utterly strange, and afterwards I kept thinking about how different it is to focus on an object's translucence, when so much of what we think of when confronted with the material world has to do with the seeming solidity of the opaque.

Mr. D was particularly transfixed by the video installation, and kept crying out to us to, "Quick, look now!" as the kaleidoscopic patterns morphed before his eyes. "It's always different," he explained to us in the tone of one who understands and would like to bring the neophytes up to speed. 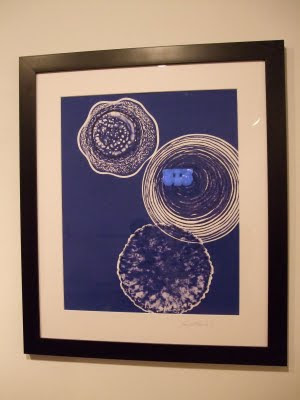 Here's a picture of T's favorite piece, with the video installation's reflection adding its own note to the composition. If you look closely, you can also see the back of Mr. D's head reflected in the glass near the center of the frame; his attachment to the video images is also captured.

We are less solid than we seem or feel ourselves to be. There are kinds of waves that pass right through us, sometimes without our knowing it. Artists give us the chance to catch a glimpse of the impossible, to pin the wave on the shore, if only for a moment, so that we can feel and understand ourselves in relation to it.

I'm so glad we were able to go.

(And, special bonus,
the museum is just minutes away from
the famous Clinton Station Diner!
We ignored the 50 lb. burger nonsense
and went straight for the 24 hr. breakfast menu.)
Posted by Shelley at 11:05 PM 3 comments: Links to this post

The dog's fur was almost exactly the same shade of brown as the endless fallen leaves that blanket the earth behind the Princeton Friends Schoolhouse. 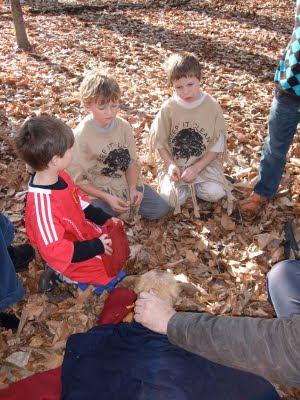 After our shared time in worship in the Quaker Meetinghouse, the adults usually migrate to the First Day School for some refreshments and fellowship. A group of the elementary school-aged children have taken to grabbing a cookie and then heading into the woods for a different sort of fellowship. K usually finds at least one salamander. Our own Mr. D likes to try to figure out what kinds of trees are in that patch of woods. And last Sunday, young E suddenly called out, "It's a DOG!"

The other boys came running, wanting to believe, but not knowing if they should. But sure enough, E was absolutely right. There, lying on the cold ground, was a dog, perfectly blended in and still except for a pronounced shiver.

"He's hurt!" yelled one of the boys, at which point they all began calling for their parents. We gathered in a little worried knot, trying to figure out how a pet could have ended up so far from any home. "He's cold," said one boy. "We should get some blankets."

"I'm going to go get some apples in case it's hungry!" yelled Mr. D over his shoulder as he dashed for the First Day School building.

The boys industriously plied the animal with apples, water, graham crackers, and goldfish crackers. The dog drank eagerly and ate obligingly. It ears perked up a bit, but it did not try to stand. One of the legs we could see looked like it had some kind of growth or injury. The tag on the dog's collar included its registration number with the Township police. The adults called the police, got some blankets, and made plans to take the dog to the animal shelter if neither its owner nor the animal control officers could be reached on a Sunday afternoon. But it was the boys who tended to the immediate needs of their discovered dog.

When the van from SAVE pulled up, the staff person gently cradled the dog in his arms and carried her away. The boys trailed along behind, not quite ready to relinquish their protective role. 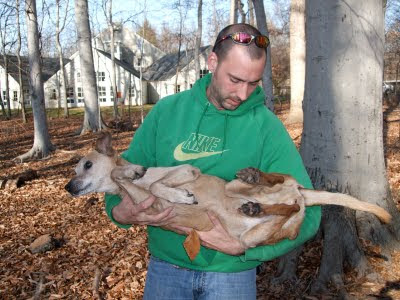 The next morning, I called SAVE to find out if they'd been able to reach the owner. "Oh, yes," they said, "she came first thing this morning and was SO thankful to get her dog back. She was crying with happiness. The dog is fifteen years old, has cancer, and is probably near the end of her life. She may even have left home in search of a quiet corner to die, but the owner is so grateful to be able to be with her for whatever time she has left."

So much to be thankful for.

(And a special Happy Birthday
to my dear friend K,
who is the mother of two of these
kind-hearted boys.)
Posted by Shelley at 2:41 PM 3 comments: Links to this post

This Hallowe'en found us fleeing the premises to join our friends up in Dunellen. Our street is still under construction, and the thought of dealing with all that mud was just more than we could bear. We put a basket full of treats on the porch with a note and hightailed it out of here. Once in Dunellen, we found a smartly dressed Highlander eagerly awaiting the arrival of our own "half-dead boy": 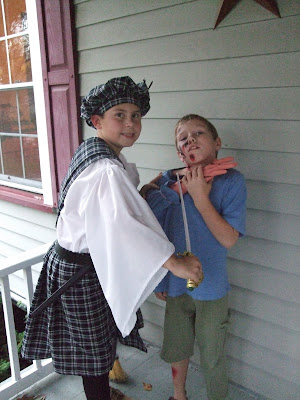 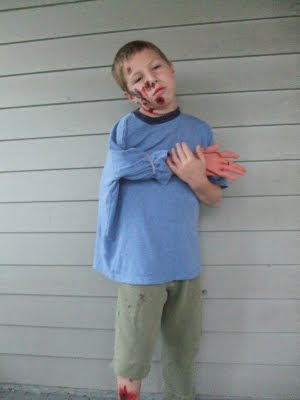 and once again, the fake blood had clearly
been flowing at our house this year. 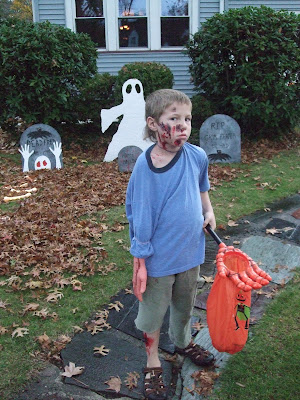 The look that says,
"Gimme some candy or I'll bleed on you..." 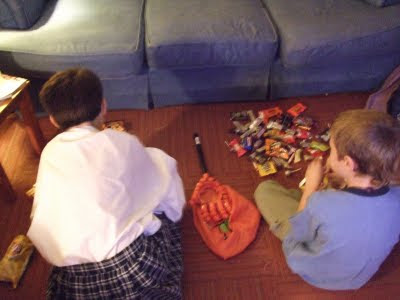 Here's the all-important loot-divvy in progress...

We all had a great time!

(And of course there are more action shots
over on Sassafras Mama's blog!)

Email ThisBlogThis!Share to TwitterShare to FacebookShare to Pinterest
Labels: photo

We Missed the Party 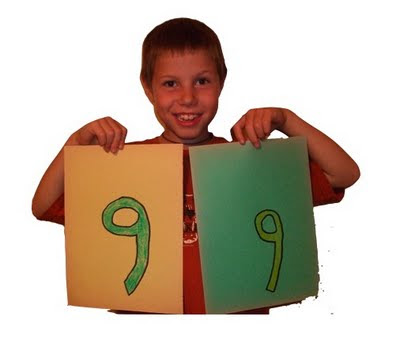 Mr. D's great grandmother Wid celebrated her 99th birthday recently. We couldn't make the party, so we sent along some warm birthday wishes, accompanied by these images. 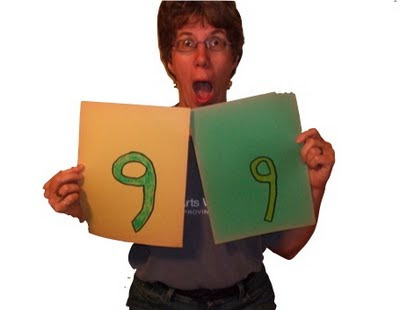 I was art-directed by Mr. D in this shot. ("You have to open your mouth and look shocked, Mommy!") Tama was still recovering from the flu, and so was granted a reprieve from our photoshoot activities.

(There's a picture from the party itself
up over at the Snowshoe Diaries.)
Posted by Shelley at 5:46 AM 2 comments: Links to this post 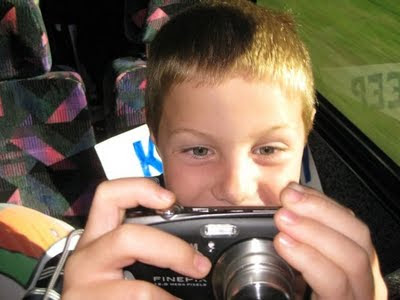 During the 2004 US Presidential race, our Mr. D was regular attender at local political events. He was three years old and being dragged along, so he doesn’t remember that much about it. My teacher friend Sassafras Mama asks her students to think about their earliest political memories, and I wonder now if our trip to the National Equality March (NEM) last month might someday qualify as Mr. D’s first political memory. 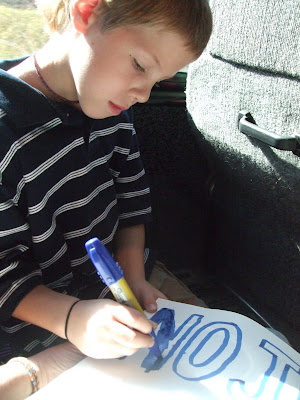 "No Justice, No Peace"
As parents, our approach to the social issues of the day – racism, immigration, healthcare, poverty, taxes, equal rights for the LGBT community – has been to try to “get out in front” and provide our Mr. D with some context. We tell our stories as the time seems ripe. He knows that our taxes help pay his teachers’ salaries, and that racism is still something we’re all working on. We have debated about how explicit to be about gay and lesbian issues, since those terms are not much a part of his everyday life, but we’ve heard from other LGBTQ parents that second to fourth grade seem to be prime years for a kind of aggressive monitoring and discussion of difference amongst students, so the National Equality March seemed like a good way to introduce him to the ideas that underlie our current struggle.

We went with a bus full of high school students, so spirits were high from the outset. Once we arrived in our nation's capital, the crowds were enormous, loud, and impressive in both their relative youth and racial diversity. Having previously attended national marches as a young student activist, it was very different to attend as a parent and quasi-chaperone. When the traditional call-and-response chant of “What do we want?” “EQUAL RIGHTS!” When do we want ‘em?” “NOW!” went up, I substituted in “YESTERDAY!” at the end, explaining to the students near me that my t-shirt (from a march in the late 1980’s) was older than they were. We got home around 11pm, and Mr. D asked some good questions without ever complaining. 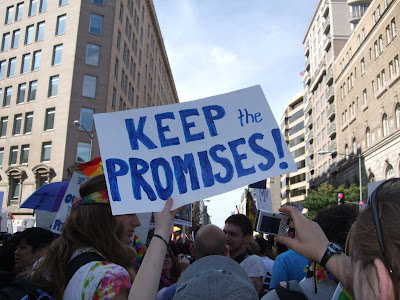 In the weeks after the March, the race for the NJ governorship tightened, with Corzine (D) and Christie’s (R) stances on gay marriage being one of the starkest differences between them. Suddenly, gay issues were up for discussion at every turn, and for the first time in his life, Mr. D heard an older kid speaking out about the “grossness” of all things gay. Our son was much better prepared to put comments like that in perspective, having had some conversations with us about homophobia and the people who oppose equal rights for lesbians and gays.

I wasn’t sure how taking an eight year old to the March would work out, but I am so glad now that our Mr. D has seen a loud, large crowd of lively supporters of LGBTQ rights. In the weeks before the National Equality March, I’d told him that although his Tama and I aren’t married in a way our government recognizes, we think we are on the right side of history and that in any case, he doesn’t need to worry about us. “How do you know we're on the right side of history?” he asked. 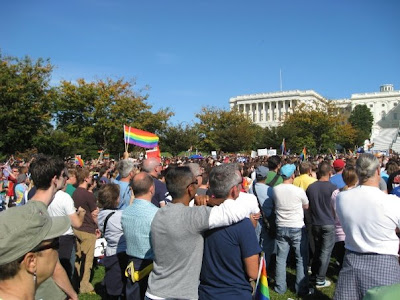 In the quiet dark of the bus ride home, I reminded him of his question and said, “Did you see all those people who came together today? That’s how I know, buddy.”

(It's taken me a long time to process
this momentous event; finally tonight,
awaiting the results of the NJ gubernatorial elections,
it seemed like the right time to pull it all together.)
Posted by Shelley at 6:48 PM 4 comments: Links to this post