We did it! We finished our presentation (one person who came up to us afterwards called it "brilliant!"), and we're headed home. Here's the program description of our presentation this morning at NACAC:
E511. Beyond Bragging Rights and Bumper Stickers: The College Process, Adolescent Development and Family Dynamics
Austin Convention Center, Room 18C
Secondary Counseling Issues

Explore issues of adolescent psychology and family development as they relate to the college process.

Case studies will illustrate how a partnership between college counseling and psychological counseling can enhance and strengthen the work of the college process.

Presented by three colleagues from the same NJ independent school.

And here's an email I got just a few minutes ago:

Thanks for the great seminar this morning. I moved into college work from a psych background and I have had been conflicted about the way college admissions sucks up my time and takes me away from working with these key developmental issues that kids are working with. However, in recent times I have accepted and found that the college application process is an excellent doorway through which to integrate the emotional psych piece into my work. Your presentations was very affirming and I hope you keep presenting on this key area of our work.

We had a terrific time and a packed room of about 200 conference attenders! A steady stream of folks approached us afterwards to request that we email them our presentation notes. The Q&A session was lively and productive. And we left with a renewed sense of gratitude for the strength of our personal and professional relationships... we make a great team! We are already plotting... how and when will we do this again? Yay!

Email ThisBlogThis!Share to TwitterShare to FacebookShare to Pinterest
Labels: adventure 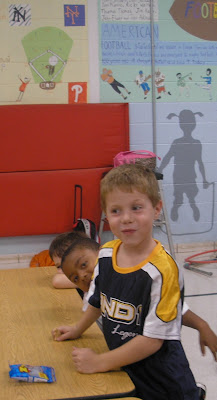 A friend (hi, Nancy!) emailed me late last night to say, "Uhhh, it's been kind of quiet over at But Wait... everything okay?"

We're FINE. Just a little swamped with the whole beginning-of-kindergarten, beginning of the school year at our respective schools of employ, and the whole hey, is that a leak in your roof? thing. (It was, kind of. Our new roof is lovely.)

D's loving school (that's him enjoying a snack break w/ his new friend T, whose birthday is today). I'm the proud mama of a brand new wiki. And as soon as I actually get on the plane for my trip to Austin tommorrow, I think life will seem a little simpler.
Funny how being 1,700 miles away from one's "to do" list puts it all in perspective. (the new baby)
(still keeps me up nights, but cute, right?)
Posted by Shelley at 6:40 AM 1 comment: Links to this post

My Life In Stories - Project Update

I've had several pieces of good news in my ongoing My Life In Stories project. (This is the project in which I record some of the oft-told stories of my life, first by titling them, and then by gradually writing the stories themselves. The idea started with a letter from my friend Fred, and is described in greater detail here.)

My entire list is currently over sixty stories long, and I've only written down ten of them so far.

But here's the good news, in two parts:

1) At the end of the summer, the artist, blogger, and super-mom Carolee Sherwood (aka the Polka Dot Witch) stumbled on my project and decided she wanted to play along! So I now finally have someone to add to my long-dreamed-of participants list. (I've had folks express interest before, but I think Carolee may be the first person to actually "up and do it.")

2) Just last week I got a postcard from AMC (via the fabulous though somewhat glitchy postcardx) asking me to write up a new story. Which I have now done! So if you need a little weekend reading, you can hop on over to the list and click on any of the highlighted ones. (Bonus points if you can spot the recent addition.)

I am so pleased to be getting this positive feedback as I continue to explore the relationship between our lives and our stories. And now there's a story-based project to be excited about on May 10 of next year, entitled Pangea Day (embedded video is 2.5 minutes long):

Posted by Shelley at 8:47 AM 9 comments: Links to this post

Email ThisBlogThis!Share to TwitterShare to FacebookShare to Pinterest
Labels: MLIS

Our lot is one of the smallest in town. Our backyard is close to tiny. For years we have been saying that it's really too small for any swingset-like structure. 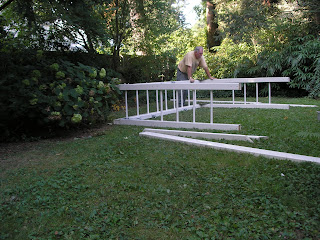 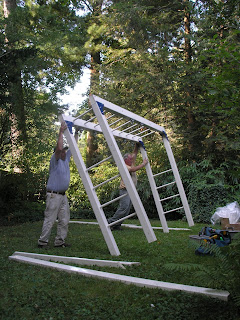 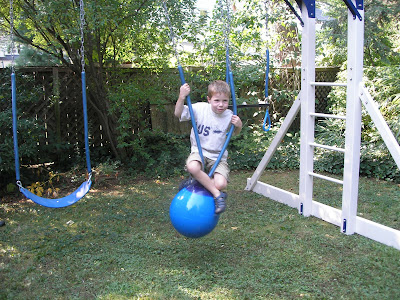 Sometimes it's nice to be proven wrong.
Posted by Shelley at 10:32 PM 3 comments: Links to this post 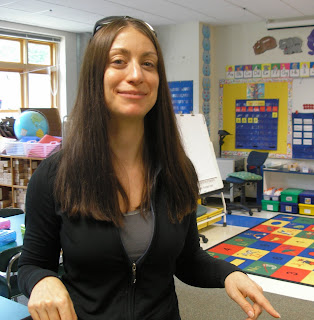 Meet Mrs. Fabulous, D's kindergarten teacher and new hero. "She really only has one big rule," he admiringly reported. "The rule is that kids can't be mean to each other. And that's a good rule. Otherwise, you can do all kinds of stuff. Like be silly, or whatever you want. She even let me do a cartwheel! In the classroom!" This last with a smile-inducing combination of awe and approval. Mrs. Fabulous is a big big hit. 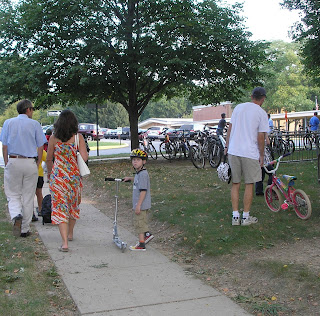 Here's our man on the scene, waiting for his Tama to catch up to his speedy scooter-powered self so that they could head on into... 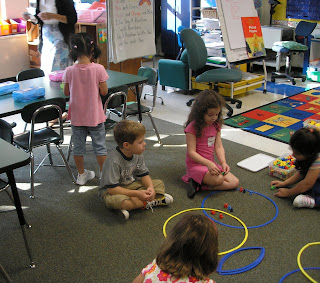 Kind of makes you want to break out the crayons, doesn't it?
:-)

(Bonus treat: Click on the scooter picture to see the larger version...
it's worth it just to get a good look at his flaming Chucks.)
Posted by Shelley at 11:49 PM 4 comments: Links to this post

It all started with a simple question.

"So buddy," I began, "what kind of cake should I make you for your birthday?"

"Well..." he started, and I could tell from the look on his face that this was going to be a good one. "I would like a chocolate cake, I think, but maybe do something unusual, like put it on pizza crust or something, I mean do something that's NOT in the recipe."

It's all Arthur's fault. You know the PBS show Arthur? Our D watched it a few days before this conversation, and in the episode he saw, Arthur's dad explained to him that for most recipes there are ingredients that cannot be omitted, but that the rest of the recipe is somewhat more open to interpretation. D was fascinated by this concept, and was keen on seeing how it played out in real life. So there I was, facing a request for a chocolate cake on pizza crust. Ummm...

Can it be done? Let's watch! 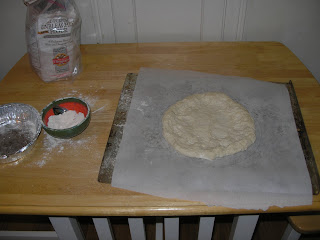 Here's a baking sheet I covered w/ parchment paper before attempting a small size pizza crust. (Those guys who toss the dough in the air and magically make it come out circular? Are magic. I watched two YouTube videos and this step STILL took me about ten minutes. Much agonizing over the physics of a baking lump of dough. Would it expand up and out? Just up? Just out? The answer, as it turns out, is mostly just up.) 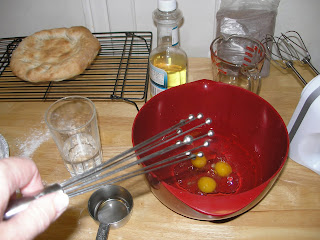 Thick but passable pizza crust accomplished (see rack at back left), so now it's on to the chocolate cake part. (Pizza crust bakes at about 500 degrees, and for only 10 minutes, so I couldn't figure out a way to have both parts of the cake baking at the same time.) But hey, check out my amazingly cool WMF Profi Plus "halo-style" ball whisk! You know you want one. 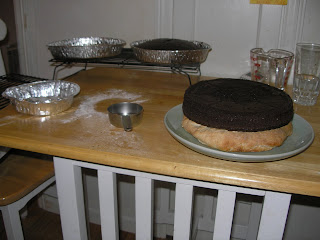 Moment of truth... 8.5 inch round chocolate layer perched on top of the pizza crust... it fits! UNBELIEVABLE. 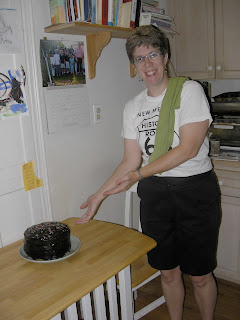 Fast forward through an entire cannister of pre-made chocolate frosting (cheating, I know, but by this time I was tired and ready to call it a day), and ta-daah! Chocolate pizza cake! But I know you're wondering... what did the birthday boy think? 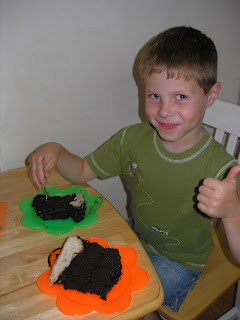 
Honestly, I'm kind of hoping he forgets all about it next year. But I'm quite pleased that it all worked out. And I think I'll finish off my Tuesday with a nice big ol' piece of Chocolate Pizza Cake. 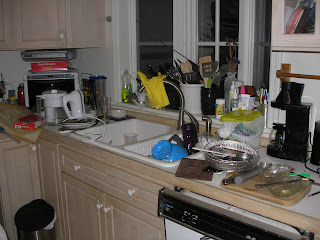 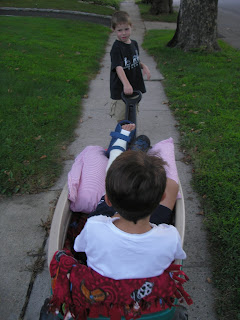 Yes, it's true. JT broke his leg. A huge bummer, but at least we were able to quickly offer up a suitably sturdy yet lightweight chariot! Thank you, Grammy and Grampy... as you can see, your wonderful wagon has now been pressed into service once again. 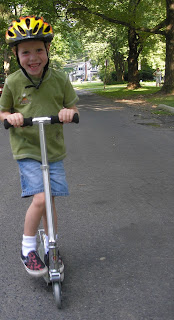 And this, Grandpa and Nana, is what the scooter-riding Birthday Boy looked like today. All day. He is a scootering fiend, and it's all thanks to you.

Tune in soon for the complete story of the chocolate pizza cake (with pictures!).

Posted by Shelley at 10:14 PM 2 comments: Links to this post