I Kid You Not

This just in. Someone who shall remain nameless saw a college application recently on which some poor kid had spelled his own name wrong. Ouch. Poor kid. In so, so many ways.
Posted by Shelley at 10:23 PM 2 comments: Links to this post

My Life In Stories

My friend Fred [waves: Hi Fred!] recently sent me a letter -- yes, the old-fashioned snailmail kind, despite the recent USPS price hikes -- and included a great addendum. One night, while suffering from a bad case of brainwhirl, Fred got to thinking about all the "true life stories" (as D. would call them) he has told over the years. He sat down to make a list of the ones that he's told enough times that they've settled down into a relatively stable version. And then he sent me the list. He's offered me the chance to pick the one he writes down next (thanks, Fred!), and I've been inspired to start working on a list of my own. So here goes, in roughly chronological order:

Posted by Shelley at 10:40 PM 2 comments: Links to this post 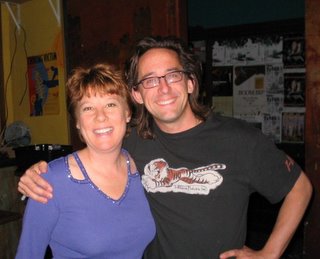 What more could we ask? Miss Amy & Ralph in concert!

We'll be there, how 'bout you?

Posted by Shelley at 6:28 AM No comments: Links to this post

"This is one of the happiest days of my life," said Lt. Hester from her home in Point Pleasant this morning. "I feel like David conquering Goliath."

In a stunning and thrilling reversal, the Ocean County Freeholders have this morning announced that they are changing their minds and will vote on Wednesday to permit Lt. Hester to extend her benefits to her partner.

Email ThisBlogThis!Share to TwitterShare to FacebookShare to Pinterest
Labels: queer

The Ocean County Freeholders continue to refuse to support officer Laurel Hester's right to grant her pension benefits to her life partner. Not really news, if you've been following the case at all... the OC Freeholders have seemed pretty "dug in" on this issue throughout. Even in the face of a heartrending video appeal.

What appalled me, sitting there in the County Administration Building yesterday, was seeing how completely unable and unwilling these guys were to "own" their action. (Or, in this case, inaction.)

What the attendees at yesterday afternoon's meeting and the citizens of Ocean County deserve, at the very least, is some kind of explanation. Instead, the OC Freeholders have offered fancy footwork and a de facto filibuster.

They really won't say much of anything.

Which isn't to say they won't talk. They'll talk until they've sucked all the oxygen out of the room. They'll read you the text of the state's domestic partnership law (which of course many of the GLBTIQ people in the room know by heart). They'll refer you to websites. They'll clarify a point that no one asked them to clarify. They'll talk about how flawed NJ's current domestic partnership law is. They'll maddeningly confirm that Laurel Hester could go out and marry some random guy off the street and confer her benefits on him tomorrow. They'll insist on a charade of civility. But at the end of the day, what they'll mostly do is sit on their hands.

At one point, the assembled group of attendees, probably about 200 people although I forgot to count, started chanting, "You have the power, you have the power!" at these guys, because it honestly seems as though they've have completely abdicated their responsibility.

Under my breath, I muttered, "You have the power because we gave it to you. And now, we will take it away."

(crossposted at Bluejersey.net, DFALink, and DKos)
Posted by Shelley at 6:19 AM 2 comments: Links to this post

Email ThisBlogThis!Share to TwitterShare to FacebookShare to Pinterest
Labels: activism I missed my chance. Paula Vogel is a Pulitzer prize-winning playwright who teaches at Brown University. She was there when I was there. And she's that rare combination... a genius who really grooves on teaching. But despite the fact that I fell in love with theater at Brown, stage-managing more shows than anyone else on campus, I never took a class with Paula Vogel.

Because I was scared of her. Or, more accurately, scared of what she represented. For in addition to being a great and gifted teacher, Paula Vogel is gay. Back in the mid-80's, walking around campus, she carried herself with the indescribable air of someone who had been through hell and didn't give a damn what anyone thought of her. I wouldn't have been able to articulate any of this then, but the very fact of her different-ness unnerved me to my core. (I don't even think she was "out" as a lesbian when I was there, at least not in any way that made that information available to an undergraduate, but still...) At a time in my life when I was wrestling with who I was and would be, Paula Vogel came to stand for a choice I wasn't ready to make. Not yet. (It wasn't until my junior year that I used the words "we" and "gay" in the same sentence.)

I am making up for lost time today by listening to one of her lectures via Princeton's awesome Webmedia site. And I think that if I could cultivate a habit of running TOWARDS the things that scare me, it might be really good for me. Except for the times when the thing scaring me is an angry grizzly bear, of course. But maybe even then.