Backdrop: A conference about the intersections of games, learning, & society
Downstage left: Ms. T, an almost high-schooler who expects to someday work at the intersection of gaming and learning.
Enter: Her doting aunt (yours truly).

So, the conference is hundreds of miles away, you say? So what! (It had to happen.)

We met some engaging and kind-hearted people, including Sheng-peng Wu, a graduate student at the University of Wisconsin (Madison) who originally hailed from Taiwan and who was volunteering at the conference, Tia Shelley (aka @TiaTalksHCI), who spells her last name properly and who studies Human-Computer Interaction at the University of Illinois at Chicago, Brittany Smith, who's a PhD candidate in the Information Science program (at the University of Illinois at Urbana-Champaign), and Michelle King, a middle school teacher from Pittsburgh with a passion for history.

Without knowing much of anything about who was who or what they were into, we lucked out big time in some of our session choices. Ms. T just had a hunch that the name Moses Wolfenstein would have required some living up to over the years, and sure enough, Moses' "Well Suffered" session on themes of failure, suffering, and triumph woven into the game "Super Meat Boy" offered some serious pay dirt. (T even got a response of "Exactly!" to a point she made in the Q&A... a very satisfying moment for this proud Auntie.)

We also had the experience of discovering that a game Ms. T played in the arcade was the work of ERIA Interactive, a design group that was well-represented at GLS. Game Developer Ted Lauterbach was clearly tickled to be able to get some feedback from a real, live gamer kid on his latest "baby," which is called Progenitor X and is kind of a mashup of the approaching Zombie Apocalypse and the latest stem cell research.

We also grooved on David Simkins' "Well Played" session, which was grounded in Skyrim, and which we were still talking about several days later: 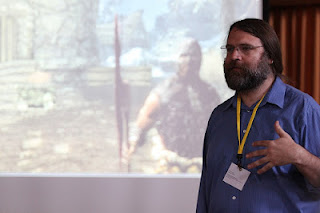 Drew Davidson's focused look at how both games and learning can be hard helped make that case that the challenge is a big part of what makes them effective and engaging. Taylor loved learning the term "creepy treehouse," which she quickly realized connected with a phenomenon she was already familiar with but hadn't known there was a name for. When we learned that Drews hails from CMU's Entertainment Technology Center and is a cookie aficionado? Well, let's just say we're fans.

All three keynotes were terrific... Colleen Macklin played games with the audience during her address, Reed Steven's "beyond the frame" analysis and videos of gamers in their element were terrific, and Sebastian Deterding had us eating out of the palm of his hand from his first slide, in which he warned us about his status as a "grumpy German." (That's his slidedeck below, if you want to get a feel for his particular flavor of awesome.)


Paideia as Paidia: From Game-Based Learning to a Life Well-Played


And finally, here's a selection of my photos from the trip:

We did have a few regrets. We chickened out on the interactive KODU session, figuring that we probably didn't know enough (either in terms of people or code) to really be useful, when of course it turned out that our N00b status wouldn't have been a barrier at all. We missed the Aris Games panel, which folks said was terrific. We only connected with the amazing Carlos "I'm from Brazil and this is my first time ever in the US" Baum after his poster session (hi, Carlos)! And I somehow managed not to eat any cheese curds, despite having been specifically told to be on the lookout for an opportunity to do so.

But we wouldn't have missed it for the world! On the last day, during the last few hours of the conference, while indulging in bratwurst out on the back terrace of the Memorial Union, I ran into a member of the Filament Games team who I'd connected with the previous day. "Hey, Fiona," I said, "this is my niece, who I was telling you about yesterday!" (Throughout the conference I had to keep explaining to people that I was neither a researcher nor a game developer, but rather the delivery mechanism for my niece, a likely future game researcher and developer.) Fiona came over to talk with Ms. T, offering a listening ear and some great advice. Then she called to a friend, "Dan, could you come over? There's someone here I'd like you to meet." Dan turned out to be Filament's Creative Director, and he, too, was happy to give some time to Ms. T. And then he asked her, "So what makes you think you might want to work in this field?" Oh man, I thought, does she even have an answer to that?

Me of little faith.

Ms. T proceeded to tell what I've come to recognize as an origin story. I'd forgotten all about how she used to draw game levels back when she was in a Waldorf School and not even spending any time in front of screens... but of course she hadn't. She went on to describe games as "the love child of all the other arts" (think about it... illustration, photography, video, drama, storytelling...). She doesn't have it all figured out yet (wouldn't that be sad?), but she definitely has a sense of where she's headed, and, as Dan warmly recommended, it seems like she's started to develop a taste for "weird problems."

Now if we could just find someplace where we could play a few more rounds of Johann Sebastian Joust:

Did I forget to highlight the existence of a conference-sponsored arcade? It was open every afternoon well into the night, and we were all encouraged to check out and play all manner of games there. JSJ is not yet commercially available anywhere (in the US, I think only a handful of game developers and their friends have had a chance to play it), so we were pleased to have a chance to check it out. It had a wonderful ability to transform total strangers into "That guy I played a game with," and that plus its kinetic wackiness made it one of the stars of the GLS arcade. We really did have fun.

Two of Mr. D's closest friends moved away last summer. Luckily for him, the young man in the red hoodie below isn't moving away until the end of this year, which has meant that these guys had plenty of time this year to get to know each other and grow close. Here they are, a couple of stars (recognize the t-shirt, Aunt Chelle?): 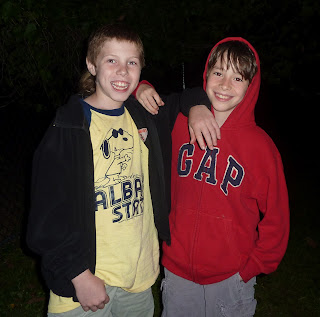 This was just after the boys' two families
oohed and ahhed our way
through another year's worth of Reunions fireworks: 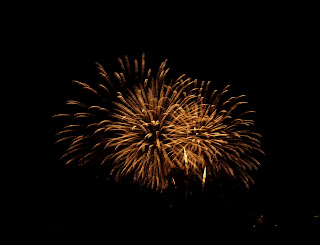 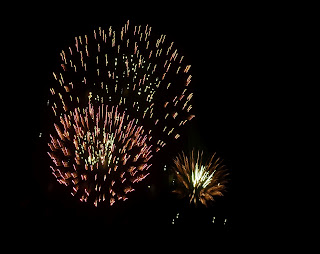 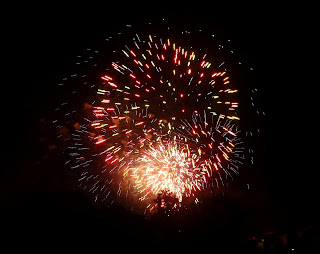 A lovely evening, in so many ways.
Posted by Shelley at 8:44 PM 2 comments:

We're not sure where this all started, but we know we weren't the first to sign up for the superstitious belief that if you start each new month with the words "Rabbit rabbit!" good luck will follow.

It's harder to pull off than you'd think. Very tough to remember something that silly first thing in the morning.

But since I am often out the door in the morning before She Who Believes In Beauty Sleep descends, our invocation sometimes happens via email.

So this month, I got the ball rolling with this little number: 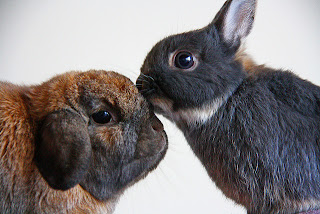 And within what seemed like moments, She Who Wears Orange responded with an cleverly Reunions-themed response: 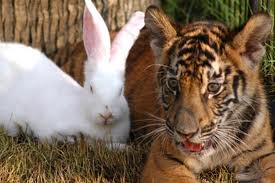 Rabbit tiger!
(Really good luck for those of us
whose lives have been claimed by Princetoniana.)

Then, just a few minutes later, I received this follow up: 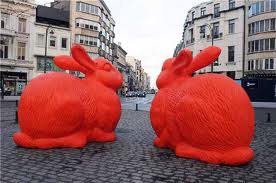 So there you have it: lots of luck!

(Do the folks in your family
subscribe to any weird superstitious traditions?
We would love to hear about them...)
Posted by Shelley at 4:07 PM No comments: