(Some portion of this post is fictitious, although at least the first sentence is true. It has been written as part of my participation this month in the Creative Act project. My theme this week is Imagined History.)

I started taking dance lessons when I was about four, I guess, with a woman who I never heard anyone call anything other than Madame Helena. Tall and regal, she seemed as if she'd come from another country (I think she had an accent), and she could correct the angle of your turnout with one quick glance in your direction. She was a force of nature, and the only game in town. If you wanted to dance in Elmira, NY, Madame Helena was going to be a part of your life.

I don't remember deciding to dance; I was probably small enough that the idea was a combination of mine and my mother's. But once I began, it was clear that I was in it for the long haul. Every year, a few more of the girls who I'd started with dropped out, moving on to gymnastics or swimming or horseback riding, and there I was, climbing the stairs to Madame Helena's studio with my pink tights and black leotard safely tucked into my dance bag.

Since dance classes at Madame Helena's were largely organized according to how long you'd been dancing, by the time I was eleven or so I was the youngest person in every class I took. I got a lot of positive feedback from my parents and other grownups in my life, and I remember enjoying the sense of mastery that came from learning a new set of combinations, but I don't remember that much about actually dancing. Which could be because it wasn't ever all that connected to the core of who I was, or because I blocked it out later.

One day, and I've never been able to remember the specifics, I overheard someone talking to my mother about my dancing, and something about that conversation brought into sharp focus that my "youngest kid in the class" status had eclipsed (at least for this woman) any real consideration of my abilities as a dancer. I was a curiousity.

A little while later, I told my mom that I wanted to quit taking lessons. And I never really danced again. 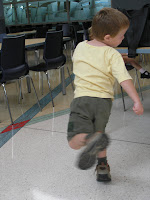 (Many thanks to the folks at The Creative Act
for their inspiring challenge this month.)
Posted by Shelley at 7:27 PM

Email ThisBlogThis!Share to TwitterShare to FacebookShare to Pinterest
Labels: spark