Belmar is a classic Jersey shore town, almost directly across the state from where I live. By Monday, our power was back on at home, but the Jersey shore communities were much harder hit and are still struggling to meet the basic needs of their citizens. I heard that Belmar had a daily roundup of volunteers at its Recreation Center (now Emergency Relief Center), so I headed over to see if I could help. These are some of the pictures I took that day (as always, clicking on an individual picture will take you to a larger version of it; especially recommended in this post, as several of these photos are very detailed).

The back wall of the Relief Center is set up a little bit like a one-aisle bodega. Volunteers help organize donations so that residents can find what they need quickly. 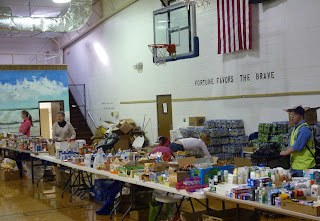 At 10am, the volunteer coordinator lets everyone know what jobs are available and what the requirements for each job are. I had brought work gloves, which qualified me for access to the houses closest to the ocean, many of which are still full of ruined household goods. Part of the instructions included an injunction to not wear any shoes we wore in Belmar back into our houses when we got home... "We've got a lot of toxicity here now," said a policewoman matter-of-factly. 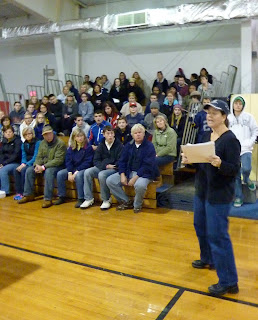 Access to Ocean Avenue and the other streets closest to the ocean is restricted to residents and wrist-banded volunteers. I was part of a crew of six people, most of us teachers, who until that day had never laid eyes on each other. We were given an address and reported to the homeowner, who, at the sight of us coming up her driveway, said, "Thank God for you people!" We helped pull years of collected stuff from her basement; almost everything was a total loss. (She had some hope that some of her preserves from higher shelves had survived.) The sound of generators was a persistent growl, and the sight of a street running with water still being pumped from basements was not unusual. Every once in a while you'd see a car that seemed weirdly parked. And just as you thought, "Why would someone park there?" you realized... no person parked the car there. Sandy just PUT it there. Jersey barriers are up everywhere to prevent people from driving in these most-affected areas. 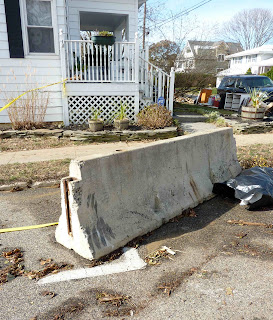 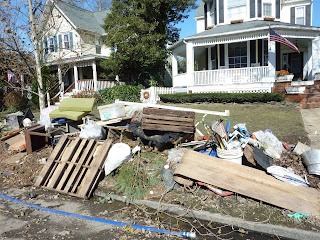 In the hardest hit blocks, there were dead fish everywhere. The usually cleansing smell of the ocean was overlaid with the smell of death and decay. 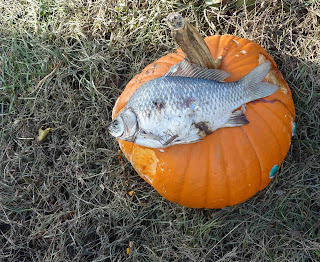 On Seventh Avenue, an attempt at restoring some power had resulted in a new disaster: corrosion of electrical circuits or ruptured gas lines caused this home to go up in flames within minutes. (I was there on Monday; this had happened Sunday evening, I think.) 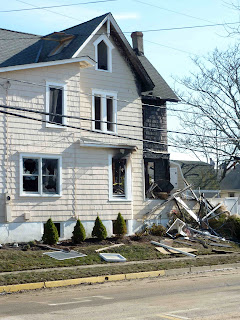 This is not what the people of Belmar are used to picturing when they hear the word "marina"... 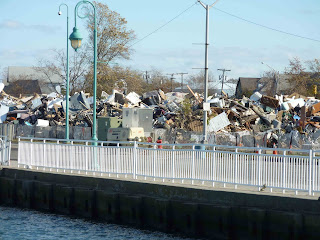 ... and everywhere I went, people were mourning the loss of their beloved boardwalk, which has largely been reduced to snarled piles of boards. 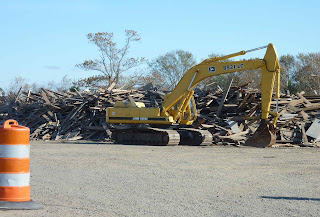 It's cold and getting colder. The day I was working in Belmar, the high temperature was 50 degrees; I took off one my sweatshirts once we got going. Today we're looking down the barrel of another Nor'easter, which is likely to bring SNOW to Belmar tonight.


(I'm going back today to deliver some supplies,
hoping to beat the storm.
If you're thinking about volunteering,
head for the Recreation Center,
which is located at 601 Main Street in downtown Belmar.
Aim to arrive around 10am any morning;
wear lots of layers, bring work gloves, and wear boots.
If you want to make a donation or deliver donations (same address),
check Belmar.com to see what they need most now.
And if you live someplace w/ a lot of downed trees,
have a chainsaw, and are open to
turning some of the dead trees that have come down
into firewood for shore families
with wood-burning stoves,
go for it!)

Thanks for sharing, and for volunteering.

Dearest S
Oh those poor people on the coast. So good you could help! Chim chim